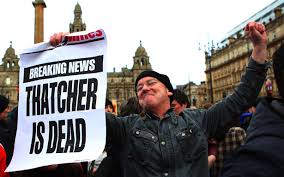 It is sad that lot of jokes going around regarding the death of former British prime minister Margaret Thatcher. Most of the jokes refer to her ill-treatment of mine workers. She was first described as "Iron Lady" by a Soviet journalist. But it remained as a honorable title to her.

I never got why Margaret Thatcher was nicknamed 'The Iron Lady'.
I mean aren't all women supposed to iron?

Tragic news this morning regarding Margaret Thatcher as doctors say she is expected to make a full recovery.


Margaret Thatcher film 'The Iron Lady' has been classed as a 12A.
It is unsuitable for miners.


There's a debate going on at the moment in the House of Commons as to whether or not Margaret Thatcher should be given a state Funeral when she dies. I think the only debate we should be having is whether or not she should actually be dead before we bury her.

I'm happy to see that after a successful minor operation, Margaret Thatcher will be staying in hospital for a few more days to recuperate.
These days, that's as good as a fucking death sentence.
David Cameron on Facebook: We're announcing drastic cuts to the welfare state.

I see there is a new film about Margaret Thatcher
Would of been better to bring it out after she Died.
That way atleast we'd know there was a happy ending


A sequel to The Iron Lady in which Margaret Thatcher is haunted by the ghost of her husband is currently being filmed.
The Phantom Denis will be released this summer.

I do love the irony.
It's Margaret Thatcher's birthday, and the whole world is focused on a mine.


Margaret Thatcher's final wish was to be cremated.
Unfortunately, we've no coal left

Just like Margaret Thatcher, I refer to my wife as "The Iron Lady"
She is also known as "The Cook Lady", "The Cleaning Lady", "The Wash Lady"...

Plans have begun for Margaret Thatcher's state funeral.
It'll be the first time ever the 21 gun salute is fired into the coffin.

After Margaret Thatcher's funeral, you will be able to download Tony Blair's eulogy to her from the BBC iPlayer.
Just look for it under 'The Blair/Witch Project'.